Wednesday, I saw a record-tying 20-strikeout performance at Nationals Park–and I didn’t realize history was happening until the 7th inning or so. 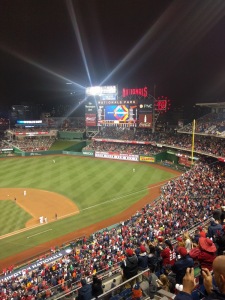 I know, unobservant. But in my defense, Max Scherzer’s pitching masterpiece for the Nationals didn’t register on the radar of catcher Wilson Ramos either until he saw that his teammate had put 17 Ks on the scoreboard.

Baseball is like that sometimes. You get so used to seeing a few innings’ worth of no-hit pitching getting broken up that you don’t pick up on an actual no-hitter happening until you’ve spent two innings waiting in line at the Shake Shack.

Yes, I’ve been that out-of-it too. As Jordan Zimmermann mowed down the Marlins in 2014’s last regular-season game, I kept thinking that the game was going by really fast while the line to get a burger was not. In my defense, that was not as stupid as my originally booking my flight home from the Online News Association’s conference to land at almost 5 p.m.; fortunately, I could remedy that mistake with a free same-24-hours flight change.

Keeping score from my seat would have been one way to avoid being oblivious about baseball history happening around me those times, but my own scorekeeping knowledge has barely advanced beyond knowing to yell “E6!” when a shortstop airmails a throw to first into the stands. And on Wednesday, I showed up late anyway.

Yet by the seventh-inning stretch that night, everybody was paying attention to every single pitch, just like we did at Nats Park two Septembers ago. Seeing the guy on the mound accomplish the near-impossible was a great feeling.

And it was something we needed after Tuesday’s gut-punch of yet another postseason elimination of the Capitals–the latest in a long series of playoff collapses for Washington teams that led embittered Post sportswriters to recast the paper’s recount of the Nats’ 2014 exit as a catch-all story of D.C. sports futility:

Games like Wednesday’s help push games like Tuesday’s into the background. And if you can’t have those, at least baseball offers enough other improbable situations that you just might get to see on any given day–a hitter running out a dropped third strike, a 9-3-6 double play, a position player coming in to pitch or a pitcher pinch-hitting–to offset somewhat the staring-at-the-wall-at-4-a.m. numbness that being a baseball fan can inflict in October.

At least, that’s what I’m telling myself now. Check back with me in the fall.