This week involved more time in airplanes than any other I’ve had since 2019. And then a week from Monday, my kid will be getting on a bus to start a new year of school–another thing that hasn’t happened since 2019. 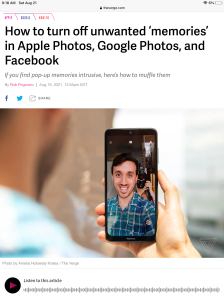 8/18/2021: How to turn off unwanted ‘memories’ in Apple Photos, Google Photos, and Facebook, The Verge

I thought this how-to about fine-tuning the Memories features in Facebook, Apple’s Photos and Google Photos would be a fairly simple listicle to write. But then the settings in some of these apps proved to be a good deal more complex than I realized. And I probably would have missed one iOS feature had I not checked in with Web developer Eric Meyer, whose writing on what he once called “inadvertent algorithmic cruelty” first made me aware of how these flashback features can go awry.