Sunday will mark our fourth month in the cat-American demographic. Adopting a cat is only one of the many unanticipated consequences of pandemic life, but no other has left the same dent in my afternoons. 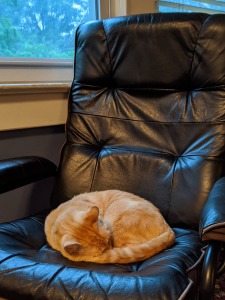 As in, getting a cat means I can’t enjoy my usual catnapping. The lounge chair that has served me so well for postprandial repose is now largely the property of the newest member of our family… and like any good cat daddy, I am okay with that, I guess.

We didn’t have cat adoption on our to-do list back in March, but as the weeks ground on, our daughter kept making the case for a pet. We understood that a cat would be on the low-maintenance end of the spectrum, so when the Humane Rescue Alliance’s site listed a domestic shorthair up for adoption, we proceeded.

The first few weeks with Abel home were tricky. (We don’t know the backstory to the name, but I assume it means he’s down to eight lives.) He was extremely skittish and spent most of his time in the safe space we’d set up in a closet–and we all paid for getting too close with scratches. But then he warmed up to our abode and has since shown a remarkable ability to find different spots in which to nap.

One of his favorite locations continues to be the chair I used to call mine. Abel will curl up there, soak in the afternoon light, and then settle into a sort of squeaky snoring. For at least an hour. The feline social engineering that cats have developed to get humans to dote on them is really something to see.

When Abel is awake, he enjoys pouncing on various household objects. Despite a lack of depth perception from one eye never developing properly, he can be remarkably fierce in attack mode; if he ever finds any of the mice that have occasionally surfaced in the basement, they’re goners. Abel also likes playing with cables and wires of any sort, so I can’t go a day without having to shoo him away from trying to paw at or nibble on my laptop’s charging cable.

I also now have a much better grasp of the unintentional comedic potential of cats. Abel and I have figured out how to play a form of soccer that involves me rolling a wine cork to him, him gnawing on it and then rolling it back, and then me passing it back to repeat the cycle. He’s also learned how to vault himself onto my desk, then slouch behind the computer and ignore my entreaties to vacate my workspace.

I would like to have contributed more cat imagery to the Internet by now. But another thing I’ve realized in my new cat-person lifestyle is that getting a non-blurry shot of an animal that embodies “short attention span” is not as easy as the pros make it look.