This week brought bad news on the client front: Glimmer, the tech-culture publication where I’ve enjoyed writing long features about such wonky topics as Google’s complex relationship with news publishers, did not survive a round of layoffs at its corporate parent Glitch. As crummy as this was for me, it was worse for my editor there who now finds herself unemployed.

This story took much longer to report than I expected, mainly because I had a hard time getting enough of the small number of tiny Internet providers to have dropped pay TV outright to return my calls or e-mails. 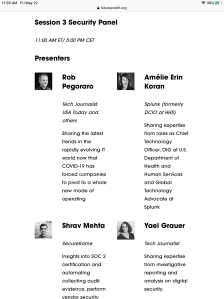 The Arabic-language news network had me to discuss complaints that Facebook is blocking pro-Palestinian speech. That’s not an allegation I’ve seen confirmed independently–it’s not hard to find pages advocating for Palestine and against Israel’s occupation–but I spent most of my time on air emphasizing the general difficulty of content moderation at scale. I hope my effort at nuance was as persuasive in the interpreter’s rendition.

Updated 6/30/2020 with the screengrab from the Futureproof IT site that I forgot to add the first time.