Hello, December–as in, the month in which the only uncertainty left about my income for the year concerns which clients will not pay an outstanding invoice until after Dec. 31. 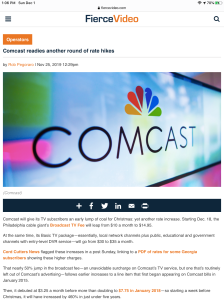 11/25/2019: Comcast readies another round of rate hikes, FierceVideo

I spent the first three mornings of the week filling in at this trade-pub client to write up breaking news. Comcast obliged me by prepping its latest in a long series of rate hikes–one topped by a nearly 50 percent increase in the broadcast-TV fee that didn’t even exist before 2015.

Monday didn’t have much else in the way of breaking video news, so I wrote up this international expansion of Starz’ streaming app.

My editor at Fierce flagged the New York Post’s writeup of the news, which extrapolated from the app-download estimates of Apptopia to conclude that almost a million people were signing up for Disney+ a day. I’m glad I asked Apptopia for comment, because they declined to associate themselves with the Post’s assumptions.

I wrote up a new Ericsson forecast calling for a boom in streaming video–fueled by rapid adoption of 5G broadband.

My first item Wednesday morning was an Opensignal study that gave streaming-video quality in the U.S. the equivalent of an F- and ranked us between Kyrgyzstan and Kazakhstan.

The headline on this was supposed to read “Streaming video plays spotted for less.” I was also supposed to have Wednesday afternoon free after filing this, but I didn’t finish writing another post for a separate client (not yet posted) until 5 p.m.

I took a short break from Thanksgiving cooking to pop in via Skype and discuss Twitter’s quickly-walked-back plans to start culling inactive accounts. Most of the questions from AJ’s host involved what Twitter should do for the accounts of deceased members, and I had to admit that it crazy for Twitter still not to have any policy for that.