BERLIN–My introduction to this city seven years ago was supposed to feature a new, world-class airport. I continue to wait on that.

When I booked my flights for the IFA trade show in 2012, Berlin Brandenburg Airport was set to open in early June as a unified airport for the unified city, replacing both Tegel in the western half and Schönefeld in the east.

But fire-safety concerns forced a postponement of Berlin Brandenburg’s opening to the next spring. And by “fire-safety concerns,” I mean the belated realization that expecting to vent smoke by having fans blow it down from ceilings to vents in the basement would be very much not up to code. So I flew into Tegel instead and have since gotten to know that airport rather well.

TXL is no prize, with a weird layout that puts passport and security at each gate. It’s also one of the few major attractions in Berlin that’s not walking distance from a U-Bahn or S-Bahn stop, instead requiring a bus connection. But Tegel does have the advantage of being open and operational.

BER, meanwhile, has seen its opening pushed back year after year while it’s sunk from being a subject of local civic concern to the internationally recognized spot where German efficiency went to die. As a BBC feature from late June recaps,  the saga involves epic levels of engineering, financial and political malfeasance. It will probably be taught as a cautionary tale in project-management classes for the next hundred years.

But although I have yet to step on or off a plane at Brandenburg, I have been inside the place. During my 2015 IFA (then, as now, the show’s organizers covered most of my travel costs), I took an afternoon off to take the BER airport tour.

Seeing this zombie airport from up close was a remarkable and spooky experience, even if I could only catch the occasional word or phrase in the German tour narration. In any language, it’s bizarre to stand on an airport ramp and not smell any jet fuel.

I took a bunch of photos and told myself I’d sell a story about that visit somewhere. And then I spent months failing to close the deal anywhere before eventually giving up. One might say that this drawn-out inability to execute was my Berlin Brandenburg Airport of freelance pitching.

Those airport tours are still available–and are something I will have to do anew before trying to revive this story idea–but now they require booking a reservation online three months in advance. So like BER itself, returning to this story will have to wait until next year. When, per the latest estimates, Berlin Brandenburg will finally open–not that you should bet too many euros on that happening by the new deadline of October 2020.

In the meantime, you might as well enjoy some of the pictures I took four years ago; if you’d rather not click through to my Flickr page (speaking of things from an earlier time), there’s a slideshow after the jump. 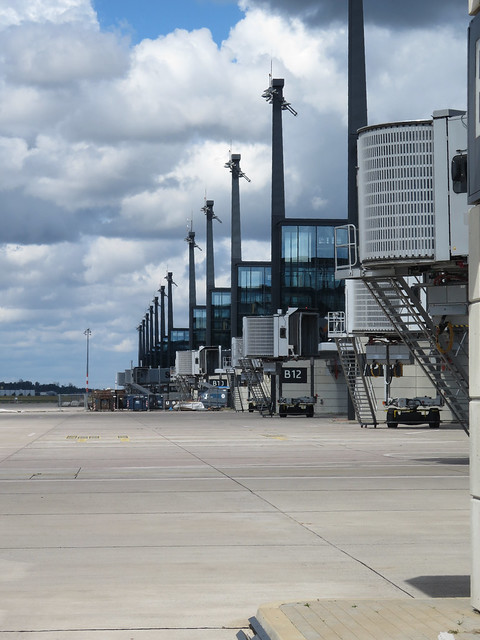 4 thoughts on “Berlin Brandenburg Airport is still not open”