When my wife’s alma mater ended March Madness Monday night by defeating Texas Tech 85-77 in overtime to claim the University of Virginia’s first national men’s college basketball championship, I knew I had a chore the next day: stashing away part of the newspaper for safekeeping. 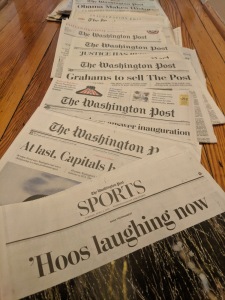 I’ve been keeping newspaper front pages and section fronts for more than 25 years now. It’s my grandparents’ fault; every time I visited Nona and Papa, I loved to flip through their collection of Plain Dealer editions, especially their copy of the paper reporting that Ohio’s Neil Armstrong had walked on the Moon.

My own collection includes the following Washington Post A sections:

The front page I wish I had is one covering the fall of the Berlin Wall in 1989, but I didn’t think to keep a copy then. The one you’re probably wondering why I don’t have is the Post’s coverage of Trump’s election–but I was on the other side of the Atlantic that Wednesday, and by the time I got home I’d decided that I did not want that reminder.