Twenty years ago today, my dad died. It was a long day, and at times like this I feel like I’m still living it.

March 26, 1999 started in the Bay Area, where I’d flown out for a friend’s wedding. I woke up early that Friday, thought to call into my work voicemail (I didn’t have a cell phone in those innocent days), and heard a vague and ominous message from my colleague Mike Musgrove. “This is really important,” he said.

I punched in his number. We had a delicate conversation light on questions that ended with him saying “call your mom.” I did and then I knew: Dad had keeled over from a heart attack that morning after walking out to get the paper.

Mom didn’t know how to reach me, so she’d phoned my office.

The rest of the day blurred endlessly. Calling to rebook my flight, trying to keep it together on 101 before ditching my rented car at SFO, staring blankly into the clouds, pacing aimlessly around ORD during my connection, and finally touching down at PHL after 11 p.m. before emptying my wallet on a taxi to reunite with what was left of my family.

I’d always thought I’d have more time. But don’t we all? 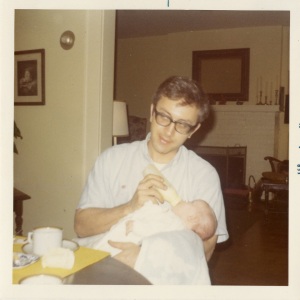 Rudy Pegoraro lived a remarkable life, growing up on the Upper Peninsula of Michigan and then some of the scruffier suburbs of Cleveland before going to Columbia University to get a chemical-engineering degree. (He loved to write and wrote well, but nobody told him he should try to make a living out of that). He did fine with his degree, landing a sequence of jobs after graduation that eventually took him about as far as anyone can get from the UP or Northeast Ohio.

The stamps on his passports from the ’60s and ’70s across Europe and Asia–including extended assignments in Pakistan and, in 1975, China to help construct new plants–make me look like a stay-at-home type.

But while Dad might have gone far, he was never distant. (The opening line of the eulogy I wrote on paper after three drafts: “My dad was one of my first and best teachers.”) His coming home always meant a big hug for everybody and then his turn in the kitchen. And at the end of the 1980s, we all got to come along as he landed a job in the Paris office of his employer at the time. 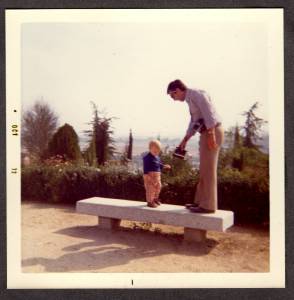 Work was not so kind to Dad in the years after that magical sojourn, but as I paid more attention I also realized how much nonsense he’d earlier tolerated at work for us. And as I learned my own hard lessons about occupational setbacks, I understood how much comfort I took from talking things over with my first and best counselor.

What I didn’t know until too late: A car-centric lifestyle and years spent struggling to quit smoking don’t help your health. Neither is having a heart condition go neglected.

I’ve now spent two decades without Dad’s help. Among other developments in that time: the most important first date of my life; buying a home; witnessing September 11; marriage; the birth of our child years after we thought that would happen; seeing my job grow miserable and then vanish; learning that I could transcend that loss; crossing “run a marathon” and “see a space launch” off my bucket list; appreciating how working from home is my opportunity to handle the chores Dad couldn’t; putting in my own time on airplanes and knowing how great it feels to come home; and watching our baby grow into an endlessly curious reader and writer who likes to hear me talk about Grandpa Rudy.

I would have liked to have Dad’s advice about all of those things. But there hasn’t been a day since March 26, 1999 when I haven’t wished that I could talk to him about whatever I’ve seen or heard.

7 thoughts on “My other Father’s Day”