Looking at my last possible day of Christmas shopping reminds me of one evening in pre-Amazon days when I wrapped up the season’s gift procurement on my walk home along Connecticut Avenue–by ducking into the shops I found interesting. That was not a cheaper time, but in some ways it was a simpler time. 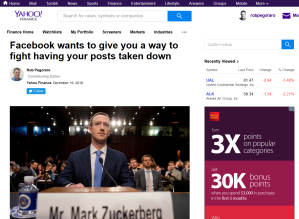 12/18/2018: Facebook wants to give you a way to fight having your posts taken down, Yahoo Finance

I had meant to write this earlier, but breaking news kept interrupting my progress. Fortunately, Facebook kept getting tripped up by new reports of its erratic enforcement of its own rules.

I had my first spot on the Arabic-language news station in a several weeks to talk about Twitter’s disclosure of a data breach that revealed the country codes of the phone numbers of some users–a data point that could have helped certain foreign intelligence agencies. My spot comes up at about 18 minutes into this clip.

I had a second appearance on an Arabic-language channel this Tuesday, this time to talk about the two reports commissioned by the Senate Intelligence Committee about Russian disinformation campaigns. I’m on at 35 minutes in.

I returned to AJ to talk about the New York Times report documenting Facebook’s history of poorly-governed data-sharing deals with other companies; I start to discuss this some 19 minutes into this clip.

I thought of one good angle to put into this post about messaging interoperability while I was on my way to Al Jazeera’s studio Thursday: Facebook’s abandoned, now-largely-forgotten plan to turn its messaging service into an email alternative that you could use from any browser.