Informed travelers don’t come here to see skyscrapers. But after years of having the Washington Monument be the highest structure in sight after a couple of radio towers, the Washington area now features some edifices outside D.C. and its self-defeating height limit that… okay, wouldn’t look embarrassingly small in Manhattan. 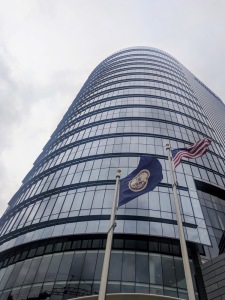 I spent this morning visiting what’s now the highest building in the area, Capital One’s 470-foot-tall headquarters in Tysons. Having watched this grow on my way to Dulles Airport over the last few years, it was fascinating to see the views from the 19th floor and on up to the roof.

It was also somewhat frustrating, in that I hadn’t thought to bring binoculars on a day a little too hazy for me to make out the District’s taller buildings. I still had a fantastic perspective of Tysons and how Metro’s Silver Line is leading it to grow upwards.

(You can get a sense of what I saw up there in my Flickr album from this tour.)

Unfortunately, I’m not likely to get that same aerial perspective again anytime soon. Capital One Tower does have event space available for outside events, but it’s clustered on the lower levels.

The second-highest building around D.C., however, features an observation deck almost 400 feet up and open to the public–tickets are $21 online, free for Arlington residents. And because the CEB Tower in Rosslyn, 390 feet tall, sits part way up a hill from the Potomac, it seems about eye level with the Washington Monument and almost that high relative to planes on their way into National Airport.

That outstanding location also lets you look down on what used to be the tallest buildings near D.C., the twin 381-foot-tall towers built in the early 1980s after a federal lawsuit sought to end their construction.

“These monsters would ruin the skyline,” Carter-administration Interior Secretary Cecil Andrus said at the time. That was a foolish thing to say then and is even more so now. Taller buildings in Rosslyn like those two and the pyramid-topped 1812 N. Moore St. help hide the ugly ’60s and ’70s-vintage boxes that defined its skyline until recently, but they still leave plenty of space for the Washington Monument and the Capitol to stand out on their own.

The other reason to applaud skyscrapers: Beyond giving you a neat view of the surroundings, they let transit and walking work in a way that sprawled-out corporate campuses can’t. And if designed right, they should also look a hell of a lot better. I’ll admit that neither Capital One Tower nor CEB Tower has quite the grace and style to get kids drawing sketches of them from memory–but we should look at these somewhat boxy assemblages as a chance to do better.

Federal Aviation Administration restrictions on building heights in Rosslyn mean we’re unlikely to get anything bigger there. But back in Tysons, there’s now a proposal for a 600-foot-tall building by the Spring Hill Metro stop. If approved and built, that would surpass a Westin in Virginia Beach to become the tallest building in the commonwealth. I would be okay with that.