For most of this past week, the conference badge was on the other lanyard: My wife was out of town for work.That brief spell of solo parenting ended with the house miraculously not much messier than before and me needing a nap more than usual. 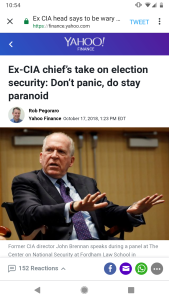 When I filed a first draft of my interview with former CIA director John Brennan two weeks ago, my editor said it read more like two posts and asked if I wouldn’t mind turning it into a pair of stories. This covers the second half of our conversation, folding in some quotes from some subsequent election-security events around D.C.

As part of what looks like the same kind of flood-the-zone coverage strategy I usually associate with Apple events, AJ had me on two more times Sunday to talk about this Twitter mole and Riyadh’s other attempts to change the social-media conversation.