Once again, Columbus Day–or, if you prefer, Indigenous People’s Day–delivered the unwelcome combination of our kid’s school being closed while both my wife and I still had to work. I joked on Twitter about resolving the argument over what to call this fake holiday and also saving Americans billions in day-care costs by abolishing it outright. But on reflection, the widely-tweeted suggestion that we relegate Columbus Day to a trivia question and promote Election Day to actual, don’t-have-to-work holiday status makes much more sense.

10/8/2018: Unlock your phone with your face or fingerprint? Here’s how to shut that off – quickly, This Morning With Gordon Deal

I talked about the subject of my most recent USA Today column on this business-news radio show. 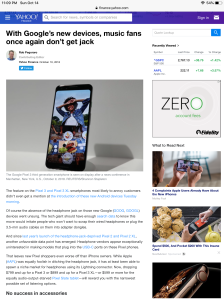 I’ve had this post in mind for a while, ever since conversations at events like Mobile World Congress and IFA revealed their lack of interest in shipping USB-C headphones. I expected that Google wouldn’t retreat from last year’s idiotic move to remove the headphone jack from its flagship smartphones, but I didn’t realize they would pull the same stunt with the new Pixel Slate tablet.

10/11/2018: This startup wants to secure absentee voting with a blockchain, Yahoo Finance

Even after spending a couple of weeks talking to various experts, I still have questions about how Voatz has been securing its blockchain-based voting system and whether states have thought long enough about how to ease absentee voting for faraway citizens. That said, many of the other options for absentee voting look even worse, something upon which I hope to write further in the coming weeks.