When an exhibition game at Nationals Park this spring revealed that beer prices there this season would hit $16, the sports commentariat went entirely and understandably crazy. Sixteen bucks?! That’s absurd. 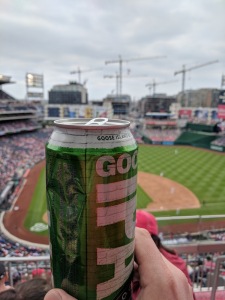 Or as a Yahoo Sports headline put it, “The Nationals’ new beer prices could pay for Bryce Harper’s contract themselves.”

But Mark Townsend’s post and others also noted that these higher prices were for 25-ounce servings. Paying either $15 or $16 for the equivalent of two quality beers doesn’t seem so bad.

And with the price of a pint at Nats Park having escalated from $10.50 or $10.75 to $12–the less-obvious land grab in this year’s changes to ballpark eating and drinking–spending $15 or $16 for a 24-ounce pour or a 25-ounce can becomes the only defensible option if you don’t want to feel quite so abused by your transaction.

Also less obvious: After you’ve had one of these economy-sized servings, buying another seems much less defensible than getting a second round might have appeared last year. Even with the Nats’ angst-inducing performance this summer, do you really want to down the equivalent of two-thirds of a six-pack at a game? The marginal utility just isn’t the same, not if you want to pay attention to the proceedings on the field.

And that’s how the Nats have gotten me to spend and drink less at the yard this year–not simply by charging more, but by exceeding the 25- to 50-cent annual price increase they’d conditioned me to expect, then giving me an option that only requires accepting the risk of beer getting warm in the sun.

Still free after this year’s round of ballpark price hikes: real-world lessons in behavioral economics.