At some point, I was going to revisit my Facebook-privacy settings, but this weekend’s news about Cambridge Analytica’s exfiltration of some 50 million Facebook users’ data via a personality-quiz app moved up that timetable a bit.

That also sped up my overdue reacquaintance with my Facebook app settings–something I hadn’t paid much attention to since I last added any apps to my profile. The how-to I wrote in late 2013 about Facebook privacy waved away that angle: “Most of the options under the ‘Apps’ heading only apply if you add applications to your profile.”

Alas, I had added a few apps to my profile, especially in the first few years I had an account. Make that a few dozen apps. They fell into a few categories:

The last category aside, it was an embarrassing exercise. How had I allowed so many apps to see my friends list? Aren’t I supposed to know this stuff?

After that humbling moment, I removed about two-thirds of the apps, with those offering discernable utility cut down to seeing only my basic profile information. I should have done that years ago. But so should most of us.

Bear in mind that I’ve never treated Facebook as a friends-only space. I know that screenshots exist; I hadn’t had a Facebook account for more than a year and change before a now-defunct D.C.-journalism-gossip site posted a sceengrab of it. If I post an update, I try to write it so it won’t look too incriminating when quoted elsewhere out of context. 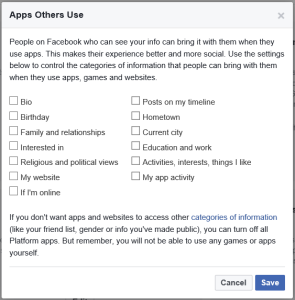 During this overdue investigation, I also looked at the “Apps Others Use” category that Facebook vaguely explains as a way for friends to bring your info to apps they use. I’d unchecked all 13 of those options, but after seeing most activated in a dummy account I keep for fact-checking purposes–and having people ask if this didn’t mean that Facebook apps could still grab data from friends–I had to ask Facebook to clear this up.

The less-than-conclusive answer I got over two e-mails: That cluster of settings dates to “before we made significant changes to how developers build apps on Facebook” that eliminated its functionality, except that it “still addresses some limited situations like photo sharing.”

So it appears that this absurdly wealthy company has trouble updating and documenting its privacy interface. That’s yet another problem Facebook needs to solve.