This year has been lousy in a variety of ways.

On a national level, the Trump administration luxuriated in lies, cruelty, bigotry, and incompetence. We learned that even more men in power had spent decades inflicting or tolerating vile sexual harassment. And widely-distributed firearms ownership left us with another year of American carnage that featured a few mass shootings so horrifying that Congress did nothing. 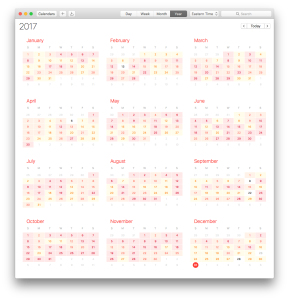 On a personal level, the worst part of 2017 was the day in March when I learned of just one of those tens of thousands of gun deaths: the suicide of my old Post friend Mike Musgrove. I think about that almost every day and still don’t have good answers.

But I have had meaningful, paying work, and for that I’m grateful.

Most of that has taken place at Yahoo Finance, where I easily wrote 8,000 words on net neutrality alone.

I continue to appreciate having a widely-read place at which I can call out government and industry nonsense, and I wish I’d taken more advantage of that opportunity–the second half of the year saw me let too many weeks go by without any posts there. But 2017 also saw some overdue client diversification beyond my usual top three of Yahoo, USA Today and Wirecutter.

I’ve done more wonky writing for trade publications, which tend to offer better rates (even if they sometimes pay slower) and often wind up compensating me for the kind of research I’d need to do anyway to write knowledgeably for a consumer-focused site. This year has also brought about the reappearance of my byline in the Washington Post and the resulting, thoroughly enjoyable confusion of readers who hadn’t seen me there since 2011.

Once again, I did more than my share to prop up the travel industry. Conferences, speaking opportunities and story research took me to Las Vegas, Barcelona, Austin, New York (only once, which should have led Amtrak to e-mail to ask if I’m okay), Lisbon (twice), the Bay Area (three times), Shanghai, Paris, Berlin, Cleveland (being driven most of the way there by a semi-autonomous Cadillac was one of those “I can’t believe I’m being paid to do this” moments) and Boston.

(See after the jump for a map of all these flights.)

Tearing myself away from my family each time has not gotten any easier, but at least all of last year’s travel put me in a position to make myself more comfortable on more of these flights. As an avgeek, the upgrade I most appreciated is the one that cleared 36 hours before my trip to Shanghai in June to put me in the last seat available on the upper deck of a United 747–barely five months before the the Queen of the Skies exited United’s fleet.

Almost all of these international trips involved concerned queries from citizens of our countries about the leadership of my own. I understand where they came from but wish they weren’t necessary. Someday, that will happen–but not in 2018.

I created the map below at the Great Circle Mapper site, following the advice of Tiffany Funk at the One Mile At A Time blog. Blue lines represent flights booked through United (which include segments on Brussels Airlines, Lufthansa and TAP) and red lines represent those on American.Maps generated by the Great Circle Mapper – copyright © Karl L. Swartz.