Last week, Facebook offered me a chance to play with the house’s money: a $10 ad credit to boost my ode to RFK Stadium, which the social network’s algorithms had seen drawing an outsized audience on my page there. 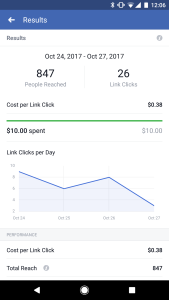 Like the last time I got this freebie, I could target people for the ad by geography, interests (as perceived by Facebook), age range and gender. Unlike the last time, I got this warning, Facebook’s belated response to learning that its self-service ad system was not magically bigotry-proof: “Ad sets that use targeting terms related to social, religious or political issues may require additional review before your ads start running.”

The logical demographic to target for a post about RFK would have been the greater Washington area–but Facebook didn’t present any such option. In a hurry and on my phone, I told it to target users in D.C., Bethesda, Silver Spring, Alexandria, Arlington and Fairfax.

Then I stuck with the default age range of 21 to 65+ and added the following interests: music festivals, Washington Redskins, Washington Nationals, D.C. United and local history. RFK being its dilapidated self, it’s too bad “peeling paint” wasn’t a choice.

Three days later, I got my results: The ad reached 847 people and yielded all of 26 clicks through to my post here. That leaves me nowhere near Russian propagandists in using money to get people’s attention on Facebook–even if in terms of reach I fared about as well as Sens. Mark Warner (D.-Va.) and Amy Klobuchar (D.-Minn.) did in their test purchase of ads to lure Hill staffers and reporters to a fake Facebook group.

But while I still see no reason to spend my own money on Facebook ads, I hope the site continues to throw out these freebies. It’s fascinating to see how the marketing machinery works from the inside; that alone easily justifies the time I put into my Facebook page.