This week involved some tech trouble at home: Tuesday morning, our fridge was near room temperature. After a call to Samsung support, they scheduled a technician to stop by Thursday afternoon, and then I borrowed a friend’s powered cooler to store the surviving food items. (We later tried rescheduling but couldn’t reach a human to change it, but the original time worked out in the end.) The cause was apparently a faulty $8.59 sensor that let ice build up and block a fan that, when partially obstructed, had earlier begun yielding annoying grinding noises that should have been our warning. It cost another $175 or so in labor and other charges to get that replaced and restore the fridge to working order. Still worth it, although I would like for this 2014 purchase to go much longer than three years before its next service incident. 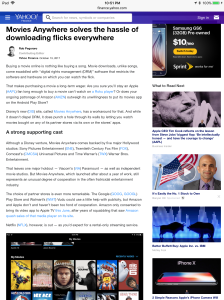 This Disney-run site, which puts copies of movies you’ve bought off Apple, Amazon, Google or Vudu in your accounts on all four services and in its own app, is shockingly good–especially in light of the sheer awfulness of the first Hollywood-run movie-download sites. The site has even improved since I filed the post: While it didn’t initially match my years-ago iTunes purchase of The Insider, by the next day it had. I’ll try to get the post updated tomorrow.

This column was set off by a reader asking if Spectrum’s app could let her retire one of her cable boxes. I realized that I hadn’t written about that, and then further research revealed that some other cable and satellite TV providers had expanded their own app offerings. A reader’s Facebook comment has since revealed an option for Fios TV that Verizon may not know about: If you have a Samsung phone and a Samsung smart TV, the mobile device’s Smart View screen mirroring can cast the Fios app to the big screen.