I take a little pride in having made it through all of July without once writing about iPhone 8 rumors.

I talked about the recent argument between Elon Musk and Mark Zuckerberg about the possible threat of highly competent, extraordinarily capable artificial intelligences. My take: The machines probably won’t kill us, but they may take some of our jobs. 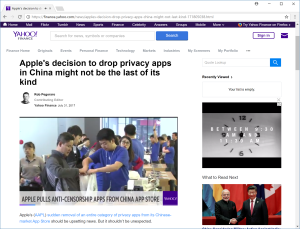 7/31/2017: Apple’s decision to drop privacy apps in China might not be the last of its kind, Yahoo Finance

The eviction of VPN apps from the Chinese-market App Store is something anybody could have seen coming. And as long as Apple leaves itself as the only judge of which apps most users can install on iOS devices, we’ll keep seeing this kind of story play out.

A lot of other sites ran with OpenSignal’s new study finding slower speeds at AT&T and Verizon Wireless after their belated reintroduction of unmetered-data plans, but most others didn’t try to compare that firm’s findings with those of other recent tests of the big four wireless carriers.

My producer asked if I could talk about some recent controversy over Google favoring Islamophobic pages in results for some common queries about Islam. I have to admit I’d missed some of that news, but on closer inspection it fit with past episodes of Holocaust denial creeping up in Google results.

8/2/2017: A massive EU privacy rule could bring an unexpected benefit for US consumers, Yahoo Finance

I hadn’t paid much attention to the European Union’s upcoming General Data Protection Regulation until moderating a panel about privacy issues at CES. But once I started looking at “GDPR” I realized that these EU rules could make a difference here by requiring social networks–hi, Instagram and Tumblr–to let their users take their data with them. I can only hope that this data-portability angle resonated with some readers.

I would have filed this column a little earlier if AT&T still had the simple rate-planning tool that let visitors get estimates of different wireless plans; now, you have to step through signing up for service to see what you might pay.