I don’t get out to concerts much these days, but Monday allowed me to check out a couple of indie-rock bands for free. The Northwest D.C. venue I attended lacked such typical amenities as a bar, air conditioning and walls–but I couldn’t miss what I thought was my last chance to catch this summer’s Fort Reno concert series.

These free shows in that Tenleytown park at 40th and Chesapeake Streets NW, named after the Civil War fort, have been on my calendar since it existed on paper–so my first would have been sometime in 1996, but I can’t tell you when. They’ve been on the District’s schedule since 1968, which is an amazing record for a volunteer-run production.

The format hasn’t changed over the two decades I’ve been attending, or trying to attend, Fort Reno shows. Three local bands play short sets on a bare platform from about 7 to 9 p.m. in front of an all-ages crowd picnicking or dancing on the ill-kept grass around that stage. 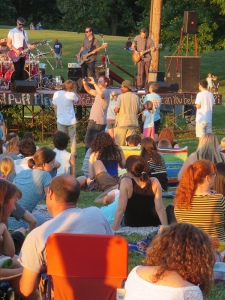 I wrote “trying to attend” because an evening thunderstorm is guaranteed to cancel the proceedings–I blame that for scrubbing at least one show featuring the Dismemberment Plan that I’d had on my schedule. And the more frequent scenario of swampy heat in the high 90s will discourage a lot of music fans from spending two hours sweltering to the beat.

But if the weather cooperates, you can see some pretty great bands. My all-time favorite show would probably be Fugazi’s August 2001 set there, but I’ve never seen a bad performance there. Monday introduced me to Makeup Girl’s peppy alt-rock; sadly, I only caught one song from Bacchae and missed Numbers Station.

Fort Reno is easy to get to, provided the Red Line isn’t a mess and traffic on Foxhall Road or Wisconsin Avenue isn’t the same (at least there’s plenty of free parking on the nearby blocks). And while you do have to bring your own dinner and a picnic blanket, you need not think too hard about nourishment: Duck into Whole Foods, get some prepared food and a non-alcoholic beverage in a non-glass bottle, and you’re set.

(The three things forbidden at Fort Reno shows are alcohol, drugs, and glass bottles. Don’t be a jerk; you can get a beer later on.)

Nobody will mind if you walk around the park to explore the scenery. Telecommunications nerds should appreciate the radio and TV transmitter towers looming overhead, while geography-minded types can summit the highest natural elevation in D.C., all of 409 feet above sea level, by walking uphill behind the stage past a large oak tree until the slope levels off, then looking for a small metal marker.

And the crowd is always a delight. Monday’s show featured the usual mix: cool moms and dads bringing their kids up right, aging hipsters (one sporting a t-shirt with the 1980s political commentary “Meese Is A Pig”), and slam-dancing teenagers. There was also one boy wearing a wolf’s-head mask, who got a “wolf boy! wolf boy! wolf boy!” cheer from the band and the crowd.

I also found out Monday that it wasn’t the last show of the summer: The organizers had rescheduled a rained-out show for this Thursday. As I type this, the weather looks… not fantastic, but definitely not rainy. So you should go.

2 thoughts on “A D.C. summer isn’t complete without a Fort Reno concert”