After 23 years or so of writing about consumer technology, it’s time to slack off a little: Walt Mossberg’s last column ran today, so I don’t have to keep up with him anymore. 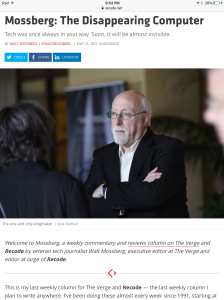 That was never easy, starting the day the Post somehow gave me my own tech column. I can only recall two times when I beat or tied Walt to a story about Apple, then as now Topic A among tech writers. Once was a review of the first shipping version of Mac OS X, when a guy at a local user group handed me a copy of that release before Apple PR would. The other was a writeup of iDVD that benefited from my willingness to stay up until 3 or 4 a.m. a couple of nights in a row.

In the summer of 2000, the Post ran a front-page profile of Walt; being a guy in his late 20s with more ego than circumstances warranted, I took it poorly. But I always liked talking shop with my competitor at tech events around D.C., the Bay Area and elsewhere. (Does anybody have video of the 2006 panel featuring myself, Walt, the late Steve Wildstrom, Kevin Maney and Stephanie Stahl in which we shared an airing of grievances about tech-PR nonsense?) And when I announced my exit from the Post in 2011, the guy with one of the busier inboxes in all of tech journalism took a moment to e-mail his condolences and wish me good luck.

Since then, Walt has remained a must-read writer, provided the occasional column idea, and been one of the people I enjoy running into at conferences. He’s a mensch–or, to translate that from the Yiddish I know almost nothing of to my native Jersey-speak, a stand-up guy.

Enjoy your retirement, Walt. But please try not to taunt the rest of us too much when we’re off to yet another CES and you can finally spend that week in January as normal human beings do.