I really did think that the 2016 gardening season had ended in December with the first hard frost. But then the parsley and the spinach refused to die. Even the few inches of snow we got in March wasn’t enough to kill them, as I found out when I removed some chunks of hard-packed snow two days after I got home from SXSW to expose intact spinach leaves that promptly wound up in a creamy pasta sauce. 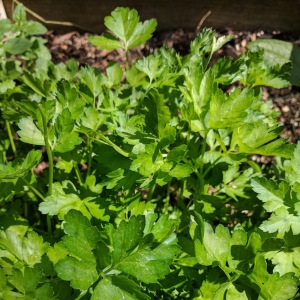 Now that the ground has warmed up and the arugula and lettuce seeds have germinated and gone to work, I suddenly have more parsley and spinach than I know what to do with–although I’m trying by throwing some into every stir-fry, stew and sauce I can put together.

I guess I’ll also be making a lot of tabbouleh and parsley-walnut pesto weeks earlier than my usual gardening schedule would suggest.

(The sage also kept going through the winter in less robust form, although there aren’t as many obvious applications for that herb.)

As much as I appreciate living in a place with actual seasons, this does look like a pleasant bonus for having a fake winter. Now if I could just get basil to be half as productive, or at least to stop taunting me with a lack of productivity…

2 thoughts on “Bonus of an unwinter: a spring surplus of parsley and spinach”