I had a busy week in Barcelona at my fifth Mobile World Congress smartphone show, and in just a few days I head to Austin for SXSW. So I may need a little more time to flesh out my Flickr album from MWC.

My first file from MWC focused on a few phones that manufacturers will sell direct to consumers, not locked to any one carrier–a trend I applaud.

This post must have fetched the biggest audience of anything I did from MWC. The Verge’s Vlad Savov gave me a shout-out, and a Reddit thread on my story racked up more than 2,000 comments–about 70 times as many as people left after the piece itself.

You’d think “is this phone coming to the U.S.?” would be a question any MWC show-floor rep could answer. You would be wrong.

3/1/2017: What you should and shouldn’t worry about in Android security, Yahoo Finance

Some enlightening conversations with security professionals led to this report. Key lesson: While you’re far safer sticking with Google’s Play Store, malware can sneak into it. And as a visit to the MWC exhibit of an Iranian app store reminded me, some parts of the world don’t get the Play Store at all. 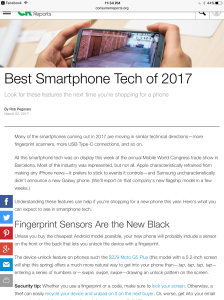 I fired off an e-mail to my editor at CR in the middle of packing two Fridays ago, asking if he needed any sort of a wrap-up post from MWC. This wound up being the last thing I filed from the show floor, then the next morning I sent in a revision from my Airbnb addressing my editor’s comments before I headed to the airport.

This shorter look at Android-phone trends went through two changes after posting: We corrected the headline so it no longer referred to five changes, then we fixed an errant reference to a Galaxy S3 on the show floor (it was a Galaxy S7 Edge). As is my practice, I called out those alterations in a comment.