I took the same laptop to CES for the fifth year in a row, which is not the sort of thing you should admit at CES. I’m blaming Apple for that, in the form of its failure to ship an affordable update to the MacBook Air, but 2016’s Windows laptops also failed to close the deal.

My mid-2012 MacBook Air did not punish my hubris by dying halfway through the show and instead was content to remind me of its battery’s age by running down rapidly once past 25 percent of a charge. Seeing a “Service Battery” alert last fall had me thinking of getting the battery replaced beforehand, but my local Apple Store’s diagnostic check reported that I could hold off on that for a little longer. 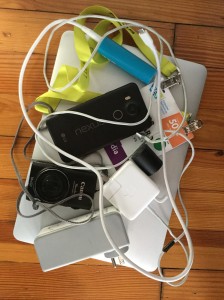 When I had to recharge my MacBook, nearby attendees could also guess its age from the black electrical tape I had to apply to its power cord to cover a frayed area–yes, this is the power adapter I bought not even two years ago. In any darkened room, they might have also noticed the glow coming my from my laptop’s N key, on which the backlight shines through now that this key’s black coating has begun to rub off.

My Nexus 5X Android phone, my other note-taking device, kept bogging down as I was switching from app to app. If I could upgrade the RAM on this thing, I could–but, oops, I can’t. Its camera, however, once again did well for most shots, and T-Mobile’s LTE held up up except for press-conference day at the Mandalay Bay Convention Center.

WiFi was once again atrocious. I’m not surprised by this, only that the Consumer Technology Association tolerated this kind of crap connectivity at its most important event.

Cute to name this CES press-room WiFi network "darthvader," but it's exhibiting the same resilience as Stormtrooper armor.

Two hardware items I know I can and should easily replace before next year’s CES are the USB charger I took for my phone and my travel power strip.

The remarkably compact charger that came with my wife’s old Palm Pixi almost 10 years ago still functions as designed, but it doesn’t charge my phone fast enough. I only took that item to Vegas because I lost the charger that came with my Nexus 5X (yes, the one I almost misplaced last year at CES) at Google I/O. I should have packed my iPad mini’s charger, which replenishes my phone much faster, but I won’t mind buying a cheap, fast-charging, two-port USB charger. Any endorsements?

My travel power strip also charges USB devices slowly, but the bigger problem is this Belkin accessory’s relative bulk. The Wirecutter now recommends a more compact Accell model; remind me to get that sometime soon.

I’d written last year that I probably wouldn’t take my aging Canon 330 HS point-and-shoot for another CES, but I did anyway. I experienced my usual wishes for better low-light performance and the ability to touch the screen to tell the camera where to focus, but this camera’s lens cover also no longer closes without me nudging its plastic petals into place.

I should have spent more time at CES checking out replacements, but I only had time to verify that the Canon pocket-sized model that looked most appealing doesn’t take panoramic photos.

7 thoughts on “CES 2017 travel-tech report: My devices are showing their age”