Merry Christmas! Today is five years and a day from the start of my USA Today column. They never did get around to putting a “#Help” title on the column (though I still use that on my invoices) and they’ve cut back on its length (shrinking its share of my income), but they have kept running it and paying me for it within two weeks of each invoice, which is what counts.

This study came out at the start of the month, but it took me a little longer to consult some experts about the potential of digital-subscriber-line connections to compete with cable and fiber. It’s there, but not if phone-based Internet providers choose to forego investing in it. If those same ISPs–hi, Verizon–also forgo expanding fiber into new markets, we have a bigger problem. 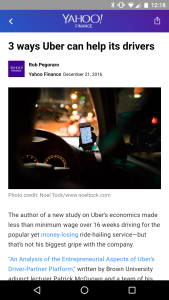 Years ago, a mobile-development shop called Proteus had space in a building across the street from the Post, and I’d occasionally lean on its CEO Patrick McQuown for background guidance about the business. Years later, I’m finally quoting him directly in his role as a professor at Brown University who just published a study of the economics of Uber from a driver’s perspective.

When I wrote about Windows 10’s Anniversary Update this summer, a few readers got on my case for not covering their concerns about privacy in Win 10’s operating system. I read up on the subject and took detailed notes as I set up a couple of different Win 10 tablets from scratch, and this column resulted.

I am not optimistic about the state of tech policy under President Trump, and I’ve yet to hear anybody advance a cogent explanation of why I should feel any different. Congress’s history of failing to reform laws that govern law-enforcement access to stored e-mail privacy and enable patent trolling doesn’t improve my forecast.