I’m in the middle of what I trust is my final lap of business travel for the year, which started with a conference at MIT’s Media Lab Saturday and will include another in New York Tuesday and Wednesday. The chance to see family and friends in Boston and NYC was not irrelevant to my booking this travel. 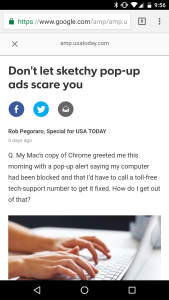 This column started with a question posted by a friend on Facebook. Spammy pop-ups on the Web aren’t exactly news (I should confess that I may have just seen one spawned by an ad on this blog), but it doesn’t hurt to remind readers that they’re almost always lies.

My unpacking of AT&T’s new over-the-top video service was held up slightly when the company spent 45 minutes touting the service without saying which channels would be available on which price plans. That PR foolishness and DirecTV Now’s initial glitches aside, I still think it’s a big deal for one wired subscription-TV provider to start selling video service into the markets of others–witness how then-Time Warner Cable CEO Glenn Britt completely dodged my question about that possibility in 2011.

A visit to New York three weeks ago for yet another conference got me thinking about how environmentalists might do well to shift their attention after Jan. 20 from the White House to large companies that, whatever their other faults, accept the scientific consensus around climate change instead of saying it’s a hoax cooked up by the Chinese government.

My contribution to the growing genre of stories about this problem, most quoting the exact same statement by Apple PR, advised readers that Apple has known about this issue since at least July. I also reminded them that while iCloud’s site will normally brush off mobile browsers, iOS and Android let you work around that restriction to change the setting allowing spam invitations to pollute your iCloud schedules.