I’m taking a week off from my USA Today column, this being a month that would have had me writing five Sunday pieces instead of the usual four. That ends a streak that had started in late 2011–but was probably never going to get close to the 566-week run of weekly Washington Post column-ization that lasted from September of 1999 through July of 2010. 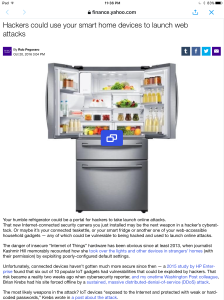 10/20/2016: Hackers could use your smart home devices to launch web attacks, Yahoo Finance

This column benefited from some extraordinarily fortuitous timing: The day after it ran, unknown attackers used hacked “Internet of Things” gadgets to launch a distributed denial-of-service (DDoS) attack against the domain-name-service firm Dyn that left large chunks of the Internet inaccessible through much of Friday.

A co-worker suggested I write about Google’s Accelerated Mobile Pages (AMP) initiative, and that turned out to be a good idea. I don’t think Google realizes the level of annoyance some readers feel over seeing news stories served from a google.com cache, but I doubt this post alone will lead to any sudden enlightenment in Mountain View.

I talked about the long wait for Apple to ship some new Macs, my experience so far with macOS Sierra, WikiLeaks, Google’s Pixel phones, and a few other things.

I spent about 10 minutes talking to Finney about the risks posed by easily-hacked IoT devices. In a fit of blatant pandering to distant listeners, I compared DDoS attacks to traffic jams on the Bay Bridge’s toll plaza.