This week took a lot more out of me than the list below would suggest: I filed two longer features and finished edits on a third, none yet published, after which I sank a lot of time into a story that wound up not working out. And then I spent Friday in a haze of Nats-playoff-exit malaise.

I last gave a talk to the computer club at this retirement community in December 2010, and the kind of gadgets you might give or get as gifts has changed greatly since then. I also didn’t have the Post’s Speakers Bureau to pay me for the appearance this time, but a friendly audience and overdue practice in extended public speaking made the drive worthwhile. 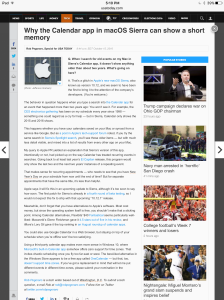 I got a surprisingly thankful response from Apple PR for reporting the defective search behavior that doesn’t show events more than two years old. (I had to resort to Spotlight to see when I last spoke at Greenspring.) Since a column that amounted to “this is a bug that they say they’ll fix” would run short, I concluded by acknowledging the bipartisan nature of glitchy bundled calendar apps: Windows 10’s somehow doesn’t support time zones. Can you suggest a replacement that does?

A fascinating DC Legal Hackers panel I attended two weeks ago got me thinking “there’s an article in this,” but I didn’t get around to filing one until Friday. So, yeah, I didn’t exactly keep it 💯 on this story.