My streak of never covering the launch of a new iPhone in person continued Wednesday, when I watched Apple unveil the iPhone 7 and iPhone 7 Plus the way any of you could have: via Apple’s video stream. 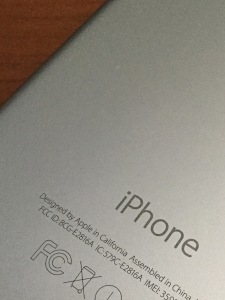 Watching a product launch on my iPad in my own home looks less like “journalism” than typing away furiously in a crowded auditorium in San Francisco. But as long as my main clients have full-time staffers who regularly cover Apple events–David Pogue at Yahoo Finance, Ed Baig at USA Today–I don’t expect that to change.

(As vain as I can get, I don’t think I’m anywhere near enough of an “influencer” to warrant an invitation solely for my social-media audience.)

The obvious downside of not being there is no hands-on time with new hardware. Worming your way through a scrum of other tech journalists to get a few minutes of time to fiddle with a phone can be a mildly degrading waste of time, but it’s also the only way to try out features like fingerprint unlocking. I’ll have to wait until the new phones’ Sept. 16 retail debut to do a hands-on inspection.

The less obvious downside is not getting to meet some tech-journalist pals. Many of the reporters who focus on Apple don’t go to CES or the other regular events on my schedule, so sitting out Apple’s events means missing their company.

On the upside, not being in a position to cover a new iPhone’s launch means I don’t have to spend too many mental processor cycles worrying about Apple PR’s opinion of me–a profoundly liberating state of affairs. And when I’m tweeting from my own couch instead of inside an event venue, I know the WiFi will work.

(After the jump: How I didn’t cover the iPhone’s 2007 debut, even though I was in Pacific time at the time.)

I knew months in advance that Macworld San Francisco and CES would overlap in 2007, and that CES would have to take precedence. But as rumors of an Apple phone being introduced in San Francisco kept coming, I suggested to my editors that I could catch an early-morning flight from Vegas to SFO, cover the Macworld keynote, write it up and then fly back to Vegas. Management passed on the idea and saved the paper maybe $200 in airfare.