Last week, I had Bernie Sanders dead-enders and WikiLeaks zealots angry at me. This week, it’s Windows 7 users. I have to imagine that some of these embittered Microsoft customers also voted for Sanders and have WikiLeaks bookmarked, which I guess means they’re now shopping for voodoo dolls to name after me.

8/3/2016: 3 features that social networks should never, ever borrow from one another, Yahoo Finance

I had been sketching out an essay along these lines for a while when Instagram copied a Snapchat feature almost wholesale, giving me a news peg on which to hang this post. 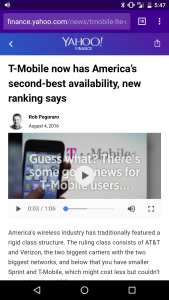 We changed the headline on this after AT&T PR complained about the use of the word “coverage” in it when OpenSignal takes care to say they only track LTE availability over time, not over geography. That struck me as a fair objection, so we revised the hed.

I was working on a different topic, which you may read next weekend or the week after, when I decided I could get this week’s column done quicker by devoting it to a walk-through of a nifty cross-platform notification system available in Windows 10’s new Anniversary Update, an upgrade I’d just installed with zero issues on two tablets I’m testing for an upcoming story.

Reader reaction has been pretty negative to this piece. Some of it is fair–like objecting to Microsoft’s problem-monitoring telemetry or the company’s pushy presentation of this update–but to call the 2009-era Win 7 a better fit for the hardware and Internet of today strikes me as a serious reach. If you had an update to Windows 10 hobble your computer, I’m sorry for your loss. But I’ve heard that complaint about every single Windows release ever, and my own experience and the prior reader input I’ve seen suggests Win 10 is a less risky upgrade than its predecessors