My work-from-home job doesn’t provide me with a regular commute to an office, but it does allow an irregular commute to a handful of event spaces in the District for one conference or another. Last summer, I posted a guide to the most frequent such venue, the Newseum’s Knight Conference Center; second place on that list probably belongs to the Ronald Reagan Building and International Trade Center, a few blocks west on Pennsylvania Avenue. If you’ve got an event coming up in this enormous facility–at 3.1 million square feet, it’s the largest building in the District–here’s what you need to know. 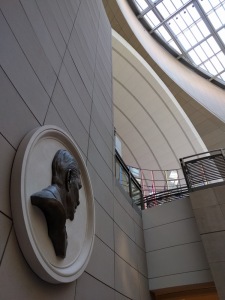 The Reagan Building’s 1300 Pennsylvania Ave. NW address is obviously convenient for anybody walking from the rest of downtown, taking Metro (the Orange, Silver and Blue lines have a stop in the basement) or taking the 14th Street Bridge from Virginia (though I can’t speak to parking options). But with an oversized Capital Bikeshare dock on its 14th Street side and the Pennsylvania Avenue cycle track around the corner, it’s also well situated for two-wheeled travel.

Be advised that one does not just walk into the Reagan Building, because its entrances greet you with metal detectors and X-ray scanners. It annoys me that I have to take my laptop out of my bag when I don’t need to do that at airports… by virtue of the Global Entry membership I obtained with a cursory interview in this very building.

Many of the Reagan Building’s meeting spaces are below street level and therefore have terrible phone reception. Inconveniently enough, the WiFi requires a username and password–and yet every event I go to here seems to leave that information out of the program. Half the time, the event organizers also forget to tape a printout with those details in any obvious spot.

Power outlets, however, are reasonably easy to find. I can’t remember seeing the auditoriums get split into two or three, so if you’re in a room you should be able to count on locating one along a wall instead of realizing that you’ve found a temporary divider.

It’s been remarkably good over the variety of events I’ve attended here, not all with high-dollar production values. I can’t say that I’ve had any memorable meals here, but what do you want for free ethics-compliant hors d’oeuvres?

There’s not much of a view to be had from most of the building, leaving you to focus on the Reagan Building’s own fine if restrained architecture. The vast atrium that greets you when you enter from 14th Street is one of Washington’s better public spaces, but otherwise this edifice focuses on fitting into the rest of the Federal Triangle area. Since the Reagan Building filled a parking lot, I’d say it succeeds at that.

If you weren’t a fan of Reagan’s rhetoric about the risks of government power, you can also derive a certain malicious glee at seeing the 40th president memorialized in an $818 million temple–double earlier estimates!–to big government.