If you’ve been wondering what my workspace looks like, have a look at the Pinterest board the Wirecutter and Sweethome posted this week to accompany a guide to home-office setups. The photo I took of my desk and its surroundings is at the right; as you can see, it’s a lot less slovenly than my cubicle at the Post. 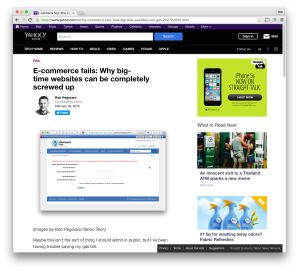 2/29/2016: E-commerce fails: Why big-time websites can be completely screwed up, Yahoo Tech

I was originally going to write a rant here about Washington Gas’s new and horrifically-bad customer-service site, but then I remembered that I should try to be a good capitalist and get somebody to pay me for the post. I also realized I could put my utility’s fiasco in the context of large organizations botching IT deployments.

Any time I can write about DIY robots on the moon, I will. This column also allowed me to make some overdue use of the notes I took at the White House’s Demo Day last August.

My latest appearance on this podcast involved a lot of discussion of the Apple-encryption case, plus a little banter about what the next iPhone might look like.