Every earlier version of this annual post has come in November or December, but this time around winter forgot to start on schedule. Until a few days ago, I could still step outside and grab some cilantro, parsley, oregano or mint.

With temperatures that fell into the teens yesterday and a snowstorm forecast for the weekend, that’s no longer an option. So it’s once again time to grade my attempts at growing my own food in our tiny backyard.

This grade is almost entirely parsley-driven. I had so much of this stuff growing that I started making tabbouleh just to make it go away (and was then flattered to have a friend with Lebanese ancestry approve the results). Parsley-walnut pesto is another good way to deal with a surplus of that herb; it keeps forever in the fridge and is a good addition to sandwiches. I also had good results with mint, oregano, rosemary and chives, leaving basil as this year’s one notable disappointment. 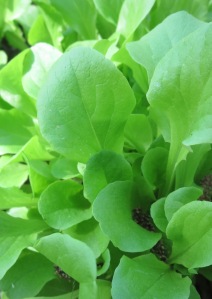 Once again, I had more of these than I knew what to do with, and too many rotted on the vine. I should have blanched and frozen them, right?

Like last year, this did fantastic in the spring, but my attempts at a fall crop didn’t pan out. I’m blaming the crush of conferences that kept me out of town for much of September.

Getting this to grow always makes me happy, because lettuce is one of the more expensive items per pound in a store. This outperformed in the spring, but nothing came of the seeds I planted in September.

I got a decent yield in the spring, and then it was starting to show signs of a second crop in the fall when the weather got a little too cold for a vegetable that fragile.

I finally stopped trying to grow them on the shady side of the house and instead set up a planter on the sunnier end of the back patio, but the local squirrels kept snacking on my still-green tomatoes until I finally enclosed the whole thing in netting. One last, sad, little plum tomato has now almost ripened in my kitchen.

I harvested two or three, tops. But since I’d only bought one packet of seeds, that’s not an awful return on investment when you compare what buying those cukes would have cost.

I assure you that I planted some seeds for them, but I cannot tell you what happened to them afterward.