Thursday’s post at Yahoo Tech critiquing Donald Trump’s notion of “maybe, in certain areas, closing the Internet up in some way” did not go over well among Trump fans. 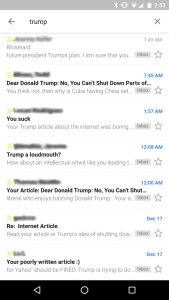 I expected as much, but I did not quite expect to see quite their rage so poorly expressed–like, for example, the fellow whose entire message consisted of a one-word subject header, “Bull,” and the “Sent from my iPhone” signature. Another disgruntled individual closed with “Your a Complete ASSHOLE.”

A few less spittle-flecked messages expressed disdain for my calling The Donald a blowhard or a loudmouth. My response: If Trump isn’t one, then those words no longer have any meaning in the English language.

Several asked why we couldn’t cut the terrorists off from the Internet when North Korea, China or Cuba maintain an iron grip on their citizens’ online access. Well, if we could exercise that level of control over Iraq and Syria, wouldn’t we already have rounded up the Daesh death cultists by now?

Finally, a few led with “you’re just a member of the liberal media.” Hoo boy, I’ve never heard that one before. I will have to warn my colleagues about this novel insult they may come across on the Internet.

On the other hand, a couple of people wrote in to say they appreciated the story. So I’ve got that going for me.

3 thoughts on “Donald Trump supporters have some opinions”