My mom is getting ready to move to a smaller place, so I’ve spent some of the last few days inspecting a large collection of old photos, papers and scrapbooks that had been collecting dust in the attic. 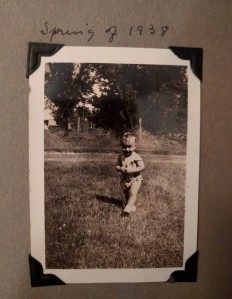 One thing I didn’t realize before starting this exercise was how unevenly these old pieces of paper would decay. Black-and-white photos from the 1930s and before (that’s my dad at the right) still look fine, but the brown paper of Mom’s scrapbooks from the 1940s (below) flakes into fine particles at the slightest pressure. There is no preserving some of this stuff.

That’s not an issue I or my heirs will have to deal with, as long as somebody takes a few minutes to copy data to a new storage medium every few years. And if an app exists to open those files, which should be a near-certainty for JPEGs and PDFs.

The other is the frequent absence of metadata. Looking at 1960s photos from cocktail parties–yes, much the same subject material as a typical weekend’s worth of Facebook photos–the only way I can identify their locations, their dates and times, and the people in them is to ask my mom. If Dad took those pictures in his single days, their details will probably remain a mystery, as he died in 1999. At least some of these photos have hand-written captions, some in writing that I can decipher without straining.

That, too, is a problem we’ll almost never have to deal with again.

It’s now been at least a dozen years since digital cameras went mainstream and we could stop worrying about not knowing the exact instant a photo was taken–assuming you remembered to set the time and adjust the time zone on a digicam. It’s been over eight years since smartphones began automatically geotagging photos. It’s been almost as long since photo-album apps on our computers or on social networks let us tag people in photos and started offering to find more pictures of them. Google Photos can even identify locations and faces in uploaded photos without any such metadata and also promises storage in perpetuity.

So some 50 years from now, when our daughter is going over old photos and videos–presumably in some VR interface–she will have a lot less mystery to deal with. But I hope she’ll come away with the same thought I’ve had while browsing through these keepsakes: You know, Mom and Dad were pretty cool back in the day.

3 thoughts on “These impermanent things: going through a near-century of mementos”