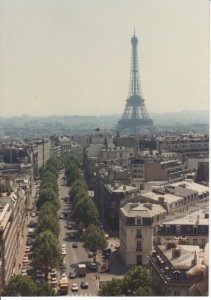 Lesser-known fact about me: For one happy summer in 1990, I qualified as a part-time Parisian. I owed that to my dad, who had first lucked into a transfer to his employer’s Paris office and then–nepotism at its finest!–arranged a summer job for me there.

Each morning, I’d board the train in the suburb of Louveciennes, transfer to the RER, escape from the subterranean, odorous archipelago of the Châtelet – les Halles station, and enjoy a short walk to Dad’s office. I’d plug away at building out a database, then take a long lunch break and explore the city.

I’d come back, immerse myself in Paradox for another few hours and then head home. I felt like I’d won an occupational lottery on top of the life-lottery victory of my parents’ move to France in 1989 and my subsequent spring, summer and winter breaks there.

The two and a half years my family spent around France’s capital before returning to the States in 1991 gave me the chance to know the city beyond bucket-list tourist attractions: the sculpture garden of modern architecture that is La Défense; quiet, tree-lined streets in the inner arrondissements; the roof of the old opera building that a friend and I somehow made our way to after ditching a tour.

This time also left me with an enduring fondness for baguettes, croissants, Camembert, crêpes, Côtes du Rhône, steak frites, duck breast, any other entrée done up with a pan sauce, and Calvados.

And it taught me to speak French well enough that Parisians stopped automatically replying in English. (I had an unfair advantage at Georgetown’s foreign-language proficiency exam: When my examiner handed me a Le Monde story and asked me to discuss it, I realized I’d read that piece a week before while spending Easter with my family.) That fluency has faded, but I still enjoy dusting off my rusty French to help a visitor like the gentleman at the Walmart near Union Station who needed a prepaid SIM card for his phone. 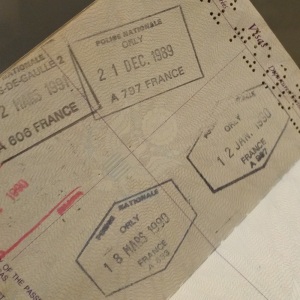 I wish I were writing this out of idle nostalgia. But I’m not. The city I adored 25 years ago fell victim to a series of monstrous crimes Friday night, apparently committed by the same craven death cult that has murdered thousands more across the Middle East and has no right to call itself “Islamic” or even “human.”

There is nothing I can do to reverse that. But I can say this much after almost a quarter-century apart: Paris, it’s been so long since last we met, but I will return. That’s a promise.