Back in March, my friend Ron Miller was recounting his experience at Web Summit a few months earlier and suggesting I go. I’m glad (not for the first time!) I heeded his advice. For a sense of those five days in Dublin, see my Flickr slideshow.

I’m now about to spend a couple of days in New York for the Consumer Electronics Association’s Innovate conference, where I can get an update on what the gadget industry’s been up to.

11/3/2015: Why Jailbreaking Your iPhone Is Legal But Hacking eBooks is Not, Yahoo Tech

Longtime readers may recall I wrote a post for CEA’s public-policy blog in 2011 about the incoherent policy of granting exemptions to the Digital Millennium Copyright Act’s ban on circumventing DRM. My wait for an opportunity to revisit this topic ended when the government issued this year’s round of exemptions a week and change ago. 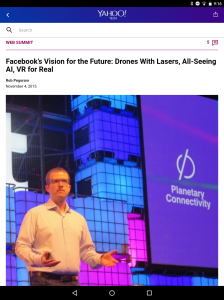 This post stands as a sequel of sorts to the piece I filed from SXSW about a similar talk from Google’s “Captain of Moonshots” Astro Teller about a comparable range of ambitious experiments.

I was worried I wouldn’t get into the hall to see Rad’s interview, but the crowds parted and I got a seat. As I asked at the end of this post: If you, unlike me, have ever installed Tinder on your own phone, do you agree with Rad’s take on this dating app?

The lede and end of this story popped into my head almost immediately, but the rest took longer to write. As in, I was still working on it while on a bus to meet three of my cousins for dinner. (Dublin FYI: The buses have WiFi that worked well for me after I’d answered a moderately intrusive questionnaire on the “captive portal” sign-in page.)