I owe a large chunk of this week’s work to Apple.

The Boston news station’s Financial Exchange show quizzed me about the pluses and minuses of Apple’s iPhone Upgrade Program. 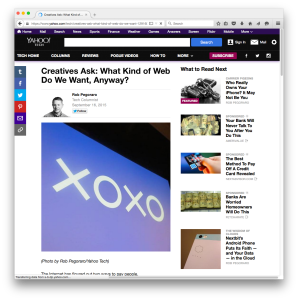 I struggled to write this on the flight back from Portland, thought about scrapping the draft, then pounded the keys over most of Tuesday to yield this. I still don’t know if this post did justice to the conference. I do know it stoked some outrage from Gamergaters who don’t seem to have learned much about advancing a persuasive argument.

D.C.’s news station had its own questions about Apple’s bid to push the wireless carriers into the background of the smartphone-procurement transaction.

An e-mail thread between a couple of my editors and me finally led to this post about changing notions of smartphone ownership. The argument over GM claiming ownership of a car’s embedded software influenced this.

I thought this weekend’s USAT column should cover an iOS 9 topic, and then Apple left a pitch right over the plate by failing to document that iOS 9’s transit navigation doesn’t work on older devices. It’s appalling how Apple keeps its users in the dark… a practice I will “punish” at some point by buying an iPad mini 4, because as a tech journalist, I can’t not have an iOS device.