This week had me wearing badges for four different events: 1776’s Challenge Festival, the Ashoka Future Forum, Mashable’s Digital Beltway, and Smithsonian Magazine’s “The Future Is Here” festival (the last of which gave me the chance to see a hoverboard in action). Is “conferenceful” a word? Maybe it should be.

5/12/2015: Why Pandora Pays Much More for the Music You Hear Than Radio Stations, Yahoo Tech

I returned to the subject of Web-radio royalties for the first time in a few years. It’s maddening that I’ve been writing about this situation since 2002–as in, about half of my post-college life–and the basic unfairness of shafting Webcasters with much higher royalty rates than other forms of radio hasn’t changed in all that time. 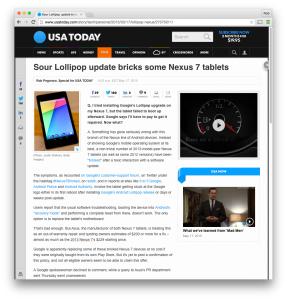 A journalist pal of mine e-mailed me last month to ask if I’d heard anything about 2013-model Nexus 7 tablets getting bricked by Google’s Lollipop update to Android. I had not, but a little research revealed that my friend was not alone in running into this issue–and that Google and Asus were being remarkably vague and unhelpful about fixing this problem.