As I’ve been plugging away at my taxes this year, one thing’s become blindingly clear: I’m not doing my share to prop up the electronics industry. My Schedule C will show only one gadget purchase for all of 2014, a $35 Google Chromecast. 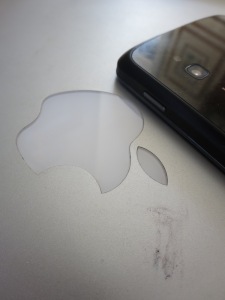 Every other device I use for work is older, sometimes a lot older. I have my reasons for not upgrading, and some of them may even be valid… while others probably just testify to my own persnicketiness.

The oldest one of the bunch is my late-2009 iMac. I really should replace it–trying to edit a RAW image file taken with a friend’s camera made it painfully apparent how its processor has aged.

But buying a new iMac or Mac mini would require me to get an external optical drive, as if it’s 1997 all over again. (Doing without is not an option: Have you seen the lifespan of a DVD in the hands of a toddler?) One thing’s for sure: Whenever I do purchase a new Mac, there’s almost no chance I’ll pay Apple’s elevated price for an external DVD burner.

My 2011 ThinkPad X120E has not held its value nearly as well–the AMD processor inside was never that fast to begin with, and these days I only run it to test things in Windows 8. What I should do is replace it with a convertible laptop like one of Lenovo’s Yoga series–that’s a kind of device I can’t buy from Apple at any price. Maybe once Windows 10 ships?

The 2012 MacBook Air I’m typing this on shows its age on the outside–I’ve let this laptop pick up so many scuff marks that it’s unclear whether I even deserve a MacBook. But while its battery life has faded a little bit, it remains a great travel companion overall. I suspect I’ll wait to upgrade this one until I can get a new model with that charges via USB-C.

The upgrade calculus is simplest with my first-generation iPad mini. When I can buy a replacement that has not just the Touch ID sensor of the latest iPad mini but the better camera of the current full-sized iPad (or something close to it) and, ideally, a default storage allocation bigger than 16 gigabytes–boom, I’ll be throwing down my credit card.

On the other hand, I’m seriously anxious about how I’m going to replace my Nexus 4. This phone has aged remarkably well, not least since Android 5.0 Lollipop seems to have stretched out its battery life (I’ll write more on that separately). And I’ve somehow only dropped it onto an unyielding surface once, with the damage confined to a small crack on the back that I fixed in place with a bead of Krazy Glue.

But the Nexus 4’s camera remains mediocre in most situations, and the phone doesn’t have enough storage. Unfortunately, I can’t replace it with a newer Nexus model–the Nexus 6 is almost offensively enormous if you value one-handed use. So are most of the other high-end Android phones. If I shattered the screen on my generally-beloved phone tomorrow, I guess I’d buy the second-generation Moto X… which itself no longer ranks as new.

Finally, there’s my Canon 330 HS camera. I bought that bargain-priced model because the Wirecutter liked it at the time–and because the larger-sensor point-and-shoot models I initially coveted all required trade-offs. As far as I know, that’s still the case with the two leading candidates: Sony’s pricey RX100, now in its third generation, still can’t geotag photos from Sony’s smartphone app, and Canon’s S120 and newer G7X can’t take panoramic photos.

Now that I’ve described my intentional technological backwardness at length, I’m sure some of you would like to explain why I’m mistaken or which new gadgets I should be considering instead of the potential upgrades I listed above. Please have at it in the comments.

7 thoughts on “All of my aging gadgets”