I spent my last two days and change at SXSW without a working power adapter for my MacBook Air, and remaining productive on my laptop was far easier than I could have imagined. 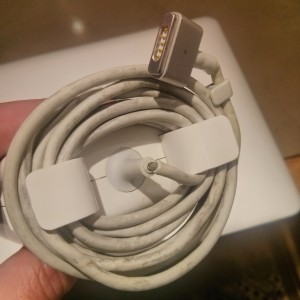 The insulation around the cable on my 2012 model’s MagSafe 2 charger had started fraying just off the power brick months ago. Sometime Sunday afternoon I realized that the wiring underneath had become entirely exposed, and the thing would only charge if it fell away from the brick at the right angle. By that night, it wouldn’t charge at all.

It’s a testament to the enormous popularity of Apple hardware that keeping my laptop charged over the next few days was so little trouble. It was nothing at all like the horrendous experience I had after forgetting to pack the charger for a Dell laptop on my way to CES 2007, when compatible power bricks for this model were a lot harder to find than Dell’s popularity at the time would have suggested.

Instead, my biggest hangup was properly spacing out my “hey, can I borrow your charger” requests so each of my SXSW pals with a MacBook Air wouldn’t feel too put upon. The closest I came to genuine inconvenience was when my Yahoo Tech colleague Jason Gilbert and I, sitting side by side with depleted laptops, had to take turns with his power adapter: We’d plug in one MacBook, charge it long enough to get its battery gauge out of the red, then plug in the other.

It also helps that laptop battery life has advanced enormously since 2007: Even after two and a half years of charge cycles, my MacBook can still last for four hours, then retain most of its remaining charge while asleep.

I didn’t even bother going to the Apple Store in Austin, far north of downtown, or looking up other computer stores downtown. I saved that errand for when I got home, when I paid $83.74 with tax for a replacement charger. Oof.

I’m not a fan of the minimalist, mono-port design of Apple’s new MacBook, but at least its use of the compact and crafty USB-C standard for charging means its users won’t have to pay those kinds of monopoly prices if they wind up in my situation.

In the meantime: Is there anything I could have done to the charger before it failed completely? The guy at the Apple Store who sold me the replacement said he sees plenty of charger cables shrouded with electrical tape, and it appears that I could have patched the cord with sugru–but of course I had neither of those things handy when the charger still worked, sort of. Sigh.

13 thoughts on “A broken MacBook power adapter and crowdsourced charging”