Weekends are a slow time around here, but not last weekend. Credit for that goes to the switch back to Daylight Savings Time… and a post I dashed off on my iPad in a fit of nerd rage last summer that I haven’t tried to promote since. 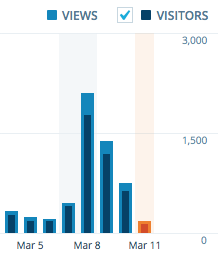 That rant about the awful interface of my wife’s Timex sports watch shared my hard-earned knowledge of how to change the time on the thing. And because this watch apparently sold reasonably well, I now get a crazy amount of traffic at each time change. Saturday, for example, this blog racked up 2,079 page views, or about 10 times the typical traffic.

I shouldn’t have been surprised to see that happen, though. The single most popular post here is a how-to about setting up Lotus Notes to forward all your mail to a Gmail account. That, too, has benefited from near-zero promotion on my part since I rewrote the instructions I’d published on the Post’s intranet.

The good news here is that Google can work as intended: If you answer somebody’s question accurately, your work will show up in search queries and get read. You don’t need the post to go viral on social media or be endorsed by some influencer; it gets found pretty much on its own.

The bad news is that this doesn’t happen instantly. And in newsrooms where writers are paid based on the traffic they generate, that kind of slow-burn popularity may not show up in the short-term metrics that can put extra dollars in people’s paychecks or leave those same staffers a little closer to being ushered out the door.

2 thoughts on “The enduring value of answering somebody’s question”