The D.C. area got its first hard freeze this week, and so this year’s outdoor gardening has officially ground to a halt–which also means it’s once again time to assess my attempts to grow my own food in a few spots around a tiny, largely shady backyard. 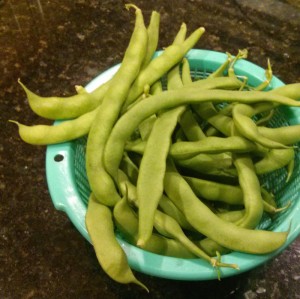 We literally could not eat these fast enough. The funny thing is, the pole beans that took over the larger raised bed did not come from the bush-bean seeds sown this spring; I guess last year’s experiment in growing pole beans had lasting effects.

This was once again a reliable performer–but my attempt to grow a second crop in the fall ran afoul of a stretch of dry weather in which I was out of town too often to water the garden regularly.

For the second year in a row, we had good results in the spring and nothing in the fall.

We never lacked for parsley, mint and rosemary (you can imagine my excitement this spring at seeing that the rosemary bush planted last fall had survived our polar-vortex winter). The sage did okay, and cilantro and basil briefly flourished. But dill, chives, thyme, and oregano all apparently don’t like me anymore.

After last year’s near-total bust, we were pleased to be able to harvest a few decent-sized cukes in the late summer.

Once again, I failed to water the pot on the back patio often enough or shield it adequately from the squirrels.

The one medium-size and one small blueberry bush in the side yard yielded a respectable amount of fruit, which I’m sure the birds enjoyed very much.

The pole beans that grew so well also effectively blocked the sun for the tomatoes. After the bean plants died, one of the tomato plants mounted a comeback of sorts, and maybe the two puny specimens I grabbed before the first freeze will ripen on the countertop. I need to look into growing tomatoes elsewhere in the yard.

I planted seeds. Nothing came of them. The end.