There’s no program on my Mac that’s annoyed me more over the last year than Mail. Which is funny, because for years I held up that program as an example of Apple working to fix customers’ problems while Microsoft let Outlook Express decay. 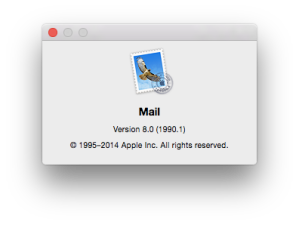 But sometime during the development of OS X Mavericks, Mail went off the rails. It shipped with a bug that made syncing with a Gmail account awkward to implausible. Apple fixed that within weeks, but other problems lingered through many or all of its updates to Mavericks:

Apple’s updates fixed some of these issues before OS X Yosemite. I don’t think I’ve seen a mailbox randomly sorted by subject in months, and I haven’t had to open Keychain Access to copy a saved Google app password back into Mail since last month.

Yosemite, to judge from its performance on my MacBook Air, has also returned search in Mail to a state of good repair. I can only hope Apple keeps working on these other issues. Because between Web-mail’s issues with offline access and working with other apps and the lack of a compelling alternative client (understandable, given how many people rely on Web-mail or don’t spend as much time in a mail client as me), firing this app just doesn’t seem too practical.

And at least the prominent mentions of Mail in Apple’s product page for Yosemite suggests the company realizes it can’t leave this app in maintenance mode. If only I could say the same for iPhoto…