Another Sunday when my brain is mostly filled with thoughts about baseball. Yes, I was at Nats Park for all 18 innings last night. No, witnessing that loss didn’t hurt nearly as much as 2012’s horrible NLDS Game 5. Yes, I still felt crummy today.

But you know what? We’re going to play another game tomorrow. Go Nats.

I revisited a longstanding frustration with Apple–its apparently allergy to public conversations with its customers in any form of social media–and found it even more obnoxious when just about every other major American corporation will talk to the people who keep it in business on multiple social networks. This also bothers me as a journalist: Doling out information to select media outlets instead of tweeting it out to its paying customers offers Apple yet another way to try to manipulate the media. 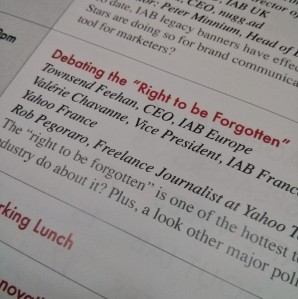 I spent a few days in New York for this Interactive Advertising Bureau conference and a couple of other tech events. My contribution to IAB’s gathering was this discussion with co-panelists Townsend Feehan (CEO, IAB Europe) and Valérie Chavanne (Yahoo France general counsel and public-policy head) about how this emerging legal doctrine in the European Union is unfolding for Internet users, search engines, Web publishers, and the rest of us.

I updated much of this guide to reflect iPhone 6 pricing (thanks for all the extra math, Sprint!) as well as T-Mobile’s expansion of WiFi calling and texting. So if you’ve been dying to know which carrier offers the best deal for not just one iPhone 6 with a 2-gigabyte data allotment, but four of them, look no further.

I talked about a Reuters report that Facebook will move to set up “support communities” for people with particular health issues or conditions. Note that on the air, I mentioned that Facebook raised privacy concerns when it bought the maker of an activity-tracking device;  the product in question is not hardware but software, the Moves activity-tracking app.

This week’s column covered something that’s puzzled me too often: How is it that my laptop’s cooling fan can sometimes rev up for no apparent reason? The column suggests a few apps that can report the processor’s temperature and indicate which apps are hitting it hardest–and admits that you may still be puzzled after going through those troubleshooting steps.