Twice in the past few weeks, I’ve gotten into debates with readers about whether an option I’ve written about exists. Each time, my source has been a company PR contact, against which the reader has cited a sales or support representative who told them otherwise. 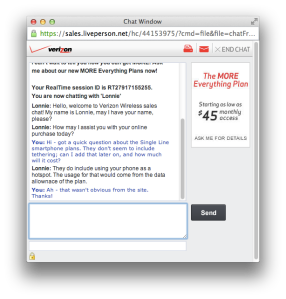 The first case came up in my Wirecutter guide to wireless carriers (updated today for the iPhone 6!) when I warned readers that Verizon’s otherwise appealing “Single Line Smartphone” plans exclude tethering.

I noted that I’d seen Verizon reps say otherwise (as in the screenshot here), but that I’d gotten the official word from a Verizon spokeswoman and the @VzWSupport Twitter account.

Then I had a commenter on the story report that two different reps had said  tethering was included. Even though that would make zero business sense for VzW–why offer a plan with the same features as one that costs $30 extra?

Next came last weekend’s USA Today column about buying an unlocked iPhone 6. In it, I cited reports from iPhone 6 purchasers and a confirmation from an Apple publicist as proof that the “no-contract” T-Mobile iPhone 6 for sale at Apple’s site is unlocked and can be used with any carrier.

Big surprise: I’ve since had readers saying Apple and T-Mobile reps told them that this phone is locked to T-Mobile. One particularly anxious shopper wrote that he’d gotten that answer from nine different people at Apple and T-Mobile.

Look: I am not the biggest fan of Apple PR, but they have been honest when I ask a yes-or-no question about an Apple product such as “is this phone unlocked?” (That’s going back many years; the staffer who gave me this answer is somebody I’ve dealt with since at least 2008.) Remember, too, that you’ve got firsthand reports from iPhone customers, including several who commented on the USAT piece.

(T-Mobile’s @TMobileHelp Twitter account did chime in, but its reply only mentions the carrier’s own warranty and “premium handset protection”–neither of which should concern you if you’ll use another carrier–and doesn’t actually say the phone sold by Apple comes locked. Apple said nothing in response because it’s apparently allergic to social-media conversations.)

Meanwhile, customer-service and support reps get the story wrong all the time. They think an old policy still applies, they try to make the customer happy, their boss told them something else, they just guess. This happens so often in travel that FlyerTalkers have an acronym for their preferred workaround for getting reps to do something allowed by policy: HUACA, short for “hang up and call again.”

None of this back-and-forth is necessary when companies post the correct answer on their sites. But I shouldn’t complain too much; their failure to do so opens an information inefficiency that I can exploit for profit… and subsequent reader e-mails explaining how they know I got it wrong.