After a week in Berlin to cover the IFA trade show, I’m home, but not for long enough–late tomorrow morning, I start making my way to Vegas for the U.S. wireless industry’s own gathering. Ugh.

I did the first of a round of interviews about Apple’s iCloud hacking problem for the local Fox station. And now you know what my home office looks like.

I did this interview via Skype minutes after checking into my IFA hotel and getting set up on its WiFi.

And this interview followed maybe 15 minutes after WTOP’s.

I did not plan to spend most of my first afternoon in Berlin cooped up in my room writing a column, but that’s exactly what I did. One other issue with Apple’s account security that I should have addressed: the weird requirement that you wait three days before two-step verification kicks in on your account.

After the quick hands-on inspection that led to this post, I’m cautiously optimistic about what LG can do with this second-generation Android Wear watch. But let’s see some battery testing first.

This is the first time I’ve written about an Intel processor launch in a long while–which may only be a consequence of which writing clients I’ve had at given times. 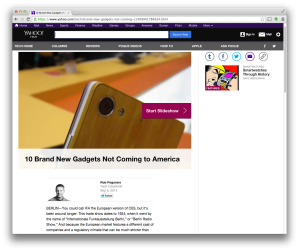 I’m still waiting to get some sort of “why do you hate America?” feedback about this post.

I briefly mentioned this weird TiVo issue last summer and then, um, kind of forgot until somebody else asked about the same problem a few weeks ago. (9/15/14: That mysterious two-word phrase was most likely my attempt to write “third-party” in a jet-lagged haze. But I have no idea what third-party app or service I had in mind at the time.)