From the thumbs-down I handed out to a Microsoft “SPOT Watch” in 2004 to last year’s “try again” dismissal of Samsung’s Galaxy Gear, I have not looked too favorably on the idea of wearing a smartwatch with a data stream of its own. 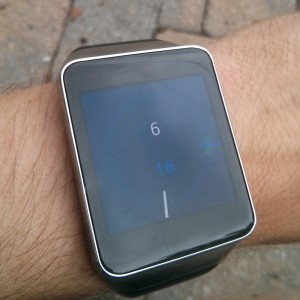 But now that I’m wearing yet another one of these devices, the Samsung Gear Live loaned to me at Google I/O, I find myself thinking of reasons why I’ll miss this thing when I have to send it back to Google PR.

Here’s the key thing it does right: provide a no-hands-required external display for my phone’s notifications list. If I’m cooking, gardening, biking or holding my daughter’s hand as we cross the street, I often have no ready way to get at the phone and so can only wonder if the beep or buzz of a notification is something I need to check or not.

Now I can see for myself. In some cases, I can dictate a reply by voice, but I’ve only done that once or twice; just knowing if what’s new on my phone is important enough to require taking it out of my pocket is good enough.

(I have, however, been surprised by how often I’ve leaned on Android Wear’s voice control while grilling: “OK Google, set a timer for five minutes.”)

Android Wear’s unavoidable updates are not always advantageous. As I noted in a Yahoo Tech column, I did not need or appreciate having the watch light up to alert me of a new e-mail (of course, spam) as I was putting our daughter to bed.

And that’s where Google could do a better job. Gmail has multiple ways to prioritize your e-mail–starring messages, marking conversations as important, displaying them in the “Primary” inbox tab–but none of them seem to inform what pops up on an Android Wear watch’s screen.

Should Apple surprise absolutely nobody by introducing an “iWatch” next month, I trust that such a timepiece will have an option to only notify you of new mail from people on your “VIP” list.

I also expect that any Apple smartwatch will be thinner than the Gear Live–which at roughly 3/8th of an inch thick, itself represents a welcome advance over the nearly half-inch thick Galaxy Gear and the 3/4-inch thick Microsoft-powered Suunto I hated in 2004.

That, in turn, should push the next Android Wear–or Pebble smartwatch, another promising contender–to get smarter and sleeker. And with these things costing $200 and change, that may be enough to get me to buy. And then you all can point and laugh at the nerd who decided he had to walk around with not one but two interactive gadgets.

12 thoughts on “Call me crazy, but I’m warming to the smartwatch concept”