Ever since I started watching the support columns for Metro’s Silver Line start to rise across Tysons, I’ve had one thought about them: That train will have some nice views up there. 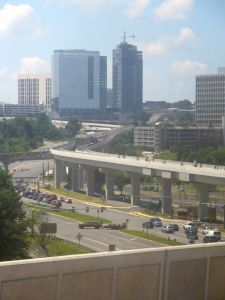 That was not a popular reaction to the decision to string the Silver Line through Tysons on aerial tracks instead of in a tunnel–from the wailing about it, you’d think that this sprawl-choked “edge city” and its six-lane arterial roads would have turned into an oasis of walkability if only the train could have gone underground.

But as I saw today on the first westbound revenue-service train and then on the way home, Tysons looks considerably sharper from 30 to 50 feet in the air. You see its budding skyline swing into view as the aerial tracks swoop above the Toll Road and over to 123, you can gaze beyond the next endless block and too-long stoplight, you can look down on Beltway traffic (go ahead, chuckle at the plight of the drivers below), and as you proceed along 7 you can try to guess which used-car lot or strip mall will get redeveloped first.

(See my Flickr album from today’s ride to Reston and back.)

This elevated perspective may not have the overall beauty of the Yellow Line’s view of the Potomac River from the Fenwick Bridge–or of the Green Line’s ride through the treetops on the way to Branch Avenue–but it is an underrated aspect of the Silver Line that I plan on enjoying on my way to or from Tysons, Reston or Dulles Airport. And the good people of Tysons might as well take ownership of it by nicknaming their stretch of this route the Tysons Corner El.

8 thoughts on “The Tysons Corner El”