It really is extraordinary (or maybe just sick) that this past week saw me still writing about an operating system that debuted in 2001. 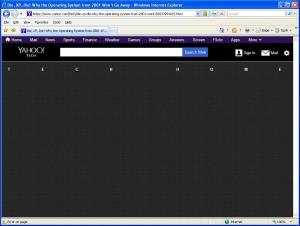 I’ve been looking forward to writing this column for several years, and when the end of Microsoft’s support for Windows XP finally arrived I found it strangely enjoyable to revisit stories I’d written five and 10 years ago about XP. I’ve since heard from a few readers who say they prefer XP to Windows 7 or 8 not just because they need to run legacy apps or don’t want to buy a new PC, but because XP is easier. I’m wary of questioning a reader’s subjective judgment, but… um, no.

(Screenshot shows how the story renders in a copy of Internet Explorer 6 in Windows XP. Don’t ask how I sourced that image.)

I talked for a few minutes about the end of XP support and what users of that fossilized malware magnet of an operating system could do to stay safe.

To judge from the low number of Facebook and Twitter shares displayed next to this story, almost nobody read my attempt to concisely how the intersection of browser security models with Web apps that look and work like local ones can lead to dysfunctional results. I’ll try to find a more enticing topic next week.