Sunday’s USA Today Q&A about getting one’s mobile number untangled from Apple’s iMessage service looks to be one of the most-read columns I’ve done there. It’s also drawn more than the usual amount of reader feedback–including two reports of remedies that I had not discovered during the week or so I spent digging into this issue. 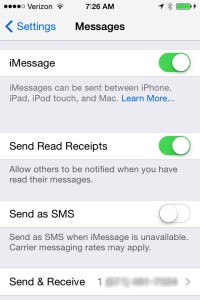 One came from an AT&T subscriber in Minnesota:

A few days before the article I had the same problem and called AT&T.  They had me text the word ‘stop’ to 48369, to which I got the response: “FREE MSG: Apple iCloud ID Verification: You have been unsubscribed and will no longer receive messages. 1-800-275-2273”

I’ve since found one confirmation of that fix in a Reddit comment and a posting on Apple’s tech-support forum. There’s also an Apple tech support notice… which only describes this procedure as a way to stop Apple from sending AppleCare identity-verification messages to a wrong number.

A reader in Washington who said he works “at a major phone retailer” sent in a different suggestion that he said “always” works: Reset your Apple ID password.

Go to https://iforgot.apple.com/password/verify/appleid Enter your Apple ID in the space and just reset your Apple ID password. Even if you don’t have access to that email or security questions, it will remove all Apple registered devices from iMessage instantly.

In case you were wondering: Neither suggestion came up in the background conversations I had with Apple PR, even though one is allegedly endorsed by Apple support.
But that’s not nearly as important as whether either cure can earn an endorsement from you. If you’ve found either one successfully exfiltrated a number from iMessage–or if you have a different fix to share–please leave a comment with the details.